Cue Kristen: Husband of Christa Hann
Back story: Kristen downed a trophy buck this year and sent it to a taxidermist since it's a once in a lifetime sort of deal 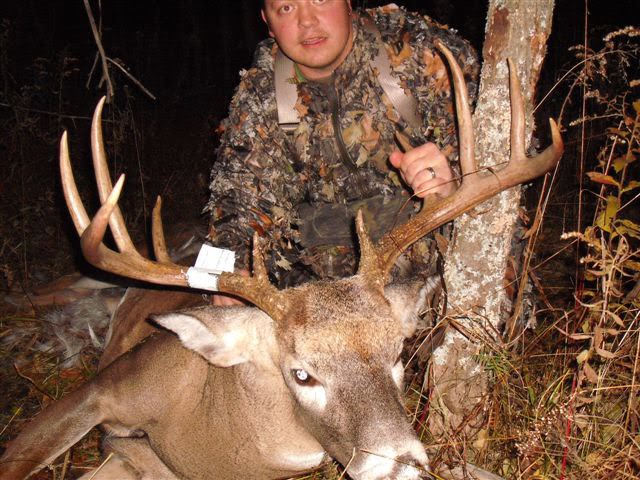 The trophy buck was ready for presentation on Christmas Eve....yeah of all times!
So the agreement was, Brutis, as Kristen has named him, could stay in the dining room over the Christmas holidays to proudly be displayed for family & friends.
As of today, it's still in my dining room...Grrrr!! 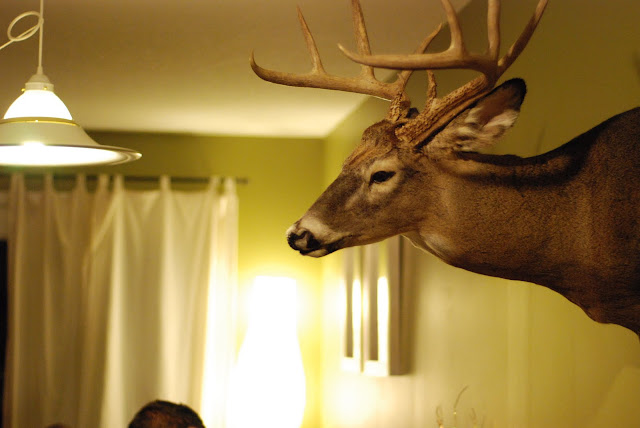 I mean seriously....just look at it, this photo was taken on New Years
It just sits there, looking, watching you.
I have a small house and this thing is so big it literally stretches across the house.
Kristen has to be careful when he stands from the table, so as to not bump his head on "Brutis!" 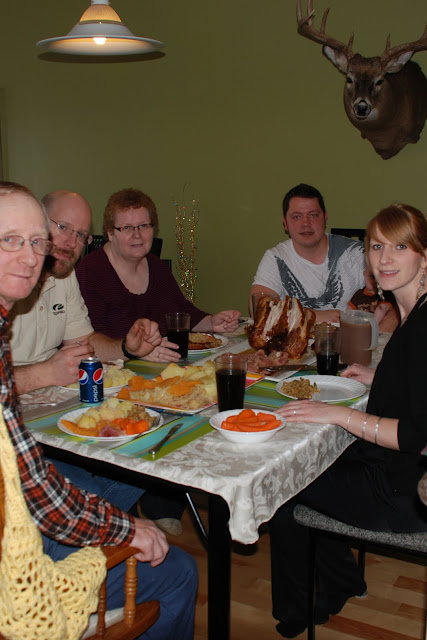 Then on to part 2 of the story
Cue Cousin Ken: Son of my Dad's sister, my Aunt Betty
The back Story: I'm sure I met cousin Ken as a child but since he grew up "on the mainland" and I grew up "on da' rock" I don't have any memories of him. I only knew 'of' him, Then along came Facebook, cousin Ken and I became friends.
At first I thought Ken was funny. I looked forward to reading his witty status updates.
That was until Christmas time........
That's when he, his wife, and daughter. Along with my Aunt Betty & Uncle Tom came for a visit. 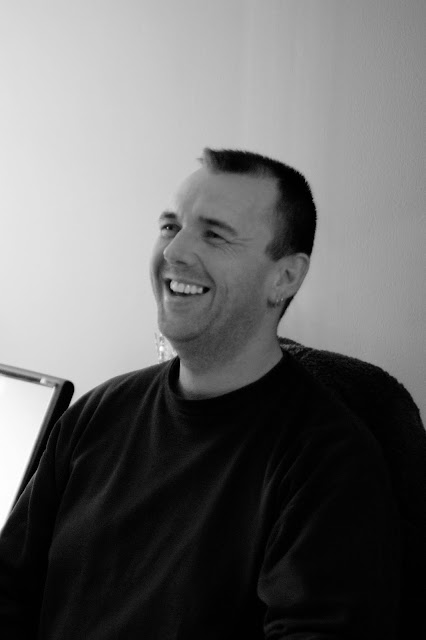 Cousin Ken decided that he liked the deer head in the dining room and him and Kristen immediately formed a bond.
I don't think cousin Ken is funny anymore.
-----------
To add fuel to my fire, cousin Ken often asks Kristen or myself if Brutis is still in the dining room and then continues to encourage Kristen on his quest to keep him there.
If I could lift the darn thing, it would have been off the wall weeks ago and in the basement where it belongs.
--------------
Then there's yesterday....I updated my facebook status as:
"can't think of anything creative to write here"
Where cousin Ken took it upon himself to write the following.....
"How about this..................
I cleaned my entire household,
it's looking rather neat.
But the deer that's in the dining room,
makes my house complete.
That's an orignal Ken poem. You can use it if you like."
My response:
"LMAO!!! That's awesome :) I'm going to use it on my blog this week....!!!"
(give me a break people.....though I'm thoroughly annoyed about the presence of Brutis in my dining room....I have to give the 'funny guy' credit where credit is due)
But to my complete surprise, cousin Ken goes and tops himself by adding to his poem with this:
"You have a blog?!?!?!? Awesome. Here's a second and third verse...
It's not a total deer,
it's just his mounted head.
He lived out in the woods,
'till Kristen shot him dead.
And now he's mounted proudly,
free from all his cares.
If my husband thinks it's staying,
then HE can move downstairs."
-------------
And I say....."Amen to that!!"

The funny guy likes this. A LOT.
Ken

haha...I read that status and was laughing my butt off cause I knew exactly what was going on...I'd totally help you move it downstairs if I was there! Perhaps you should sorta move the dining room table (Kristen's chair) over just a smidge more so that Kristen's head "accidentally" gets the horn when he stands up...and then he'll take it down himself...just an idea!

lol, I immediately hit the comment button so I could say that perhaps you should move the table a little more so Kristen could continue to hit his head, but read that Myrna had already said it before me. Ahh...funny how we both thought of inflicting pain on your husband would be a good way to get rid of the deer head. :)