I must say Wednesday nights have become a tv night for me.
CBC - A Canadian television channel for those of you who might not know, has some awesome programming that Canadians should be proud of.
My Wednesday night starts out with Dragons Den
They've even started an American version of this show called Shark Tank featuring 2 of the Dragons.
Last nights episode I especially loved since it was telling the story of how they started out with nothing and now are millionaires. Very inspiring. 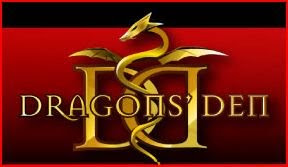 Then on to Republic of Doyle
I don't watch this show very much but I love it. I think it's just timing luckily hubby PVR's it regularly so now it's just making time to catch up on the episodes :)

I absolutely love the new show, Hiccips. It's hiliarious. If you liked corner gas than you'll love this one.

I religiously watch Republic of Doyle, to see who I know that pops up on each episode. So far not an episode that I have watch where I didn't know someone! How awesome!