Just for Her Summer Series - Marriage

"Well you signed up for it!" I exclaimed....trying to lighten the mood and Kristen's exasperation with me after another day filled with wifely nagging.
But the truth is, he did sign up for it. When Kristen & I took our vows, those solemn promises, we did sign the dotted line that said for better, for worse, for days that are normal, for days that are filled with Christa's Crazy. He knew exactly who I was and what he was signing that fateful day in 2007
Since the onset of 2011 (a mere 7 months) I have literally watched five couples, all of whom are friends or childhood friends, call it quits on their relationships, three of those since April alone. And me...well being me...it causes me to think, look at my own marriage and assess. Or in my case completely panic and go into meltdown mode. I actually talked to Kristen about this one day, about how I was freaking out about our friends breaking up and how I don't want to ever be in those shoes. How I don't ever want us to get "there" to that point of no return.
Recently I was challenged to write a letter. Write a letter of those unspoken words to someone that you should say, already should have been said but you haven't. I wrote my letter to Kristen. I wrote my letter to him....simply out of fear. Fear that we will forget who we were and who we are. Forget who we were when we were youthful and ignorantly blissful. I told him I didn't want to forget the WHY we chose each other, I didn't want to forget our dreams & wishes. I told him I didn't want to forget any of the us, because in a life filled with schedules, children & what is sometimes the mundane routine of life....we do forget. We do make mistakes. We do take for granted.
I did not sign up for mediocre.
I refuse to have a marriage that's just okay, I refuse to have a marriage that's just getting by. In a society completely absorbed with self, we don't acknowledge that marriage is filled with compromise, communication and at times sacrifice of the oh so important self.
In a society where divorce is okay, in a society where SELF is #1 and you living YOUR life, your way, is KING....I'm putting it out there that we as women can stand our ground and our belief in the bond of marriage. We as women can be that generation today to start a revolution that marriage might not be for everyone, but for those of us that have chosen it, it's worth it!
I want to look back at my life when I'm old & grey with bragging rights!! I want to be able to tell the love story that was Kristen & I. One that might have had its challenges and disappointments but we clawed and tore our way through it anyway. That our marriage was one filled with companionship, adventure, laughter and happiness. Our solemn promise that was never broken.
And with that....this week's challenge:
- Have a conversation! Talk to your husband. Tell him your unspoken words. Even if it is in a letter.
- Dwell only on the positive....even the little things like putting out the garbage. In the routine of life, it's very easy to take it all for granted.
- No grass is greener comparison...it's from the devil!! Seriously...what happens behind closed doors is so completely different than what any couple might actually let you see. Therefore, NO comparing. Every relationship is different and unique, just like people :) What works for me might not work for you, so why even both comparing apples to oranges.
- And last but not least, take time out for just the two of you. Maybe a walk, a date night, or talking an extra 10 minutes when you go to bed tonight. Make "us" a priority this week. Let's be women of marriage's that are NOT of the mediocre kind. 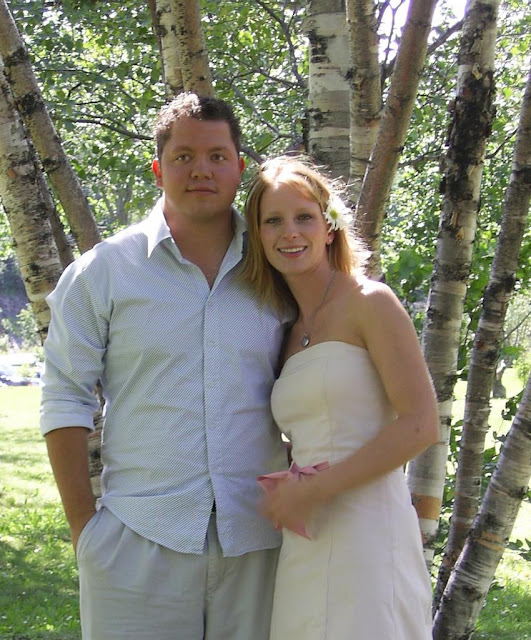 Photo of us, taken August 2005
"One of the nicest things you can  say to your partner, 'If I had it to do over again, I'd choose you. Again"
- Unknown
Labels: just for her

AMEN Christa! I think so many people should take your challenge! A few years ago, I went through exactly what you are going through with friends relationships breaking up around you and wondering 'what the heck is going on'.

It's got to the point in our relationship (with my wonderful hubby) that if we don't go out at least once per month, Noah reminds us that we haven't gone on a date and we should soon!!!

I guess we've reminded and taught him that the parents ARE the priority and he sees what happens first hand if we FAIL to make US a priority!

I'm proud of our relationship, although sometimes exhausting from all the hard work - but as the saying goes, you WILL reap the benefits if you put the hard work into it! We are living proof!!!

I'm glad you have the "FOREVER" frame of mind about marriage...I wish more people DID!!!

GAH!!! I love this Christa! Everything about it! And I love you too! Inspire a revolution, girl. Go!

I totally agree....when someone gets married and vows " for better, for worse, till death us do part" I wonder if they REALLY realize the extent of these words or when trials and disappointments come do they think that it is "just a piece of paper" or it would be easier to leave then to work hard at it and remind themselves of why they fell in love in the first place. Marraige is NEVER a easy road but if you work at it,spend time together,communicate,and put your spouses priorities before your own (as hard as it is -you know the phrase-Jesus first, others second and self last)then things will be the way they should be! Enjoy Life and Enjoy your family...seriously how much time to we actually put into "making our marraige work?" Not just for the kids or the money situation, but for US???? Obviously there had to be a connection and love there for the relationship to begin- I think its time for some couples to go back to the basics whether its 6months into the marraige or 60 years! Hard work REALLY pays off!

Oh Christa.. i love reading your blogs, and today espically!!! i have become SO tired of hearing both men and women complain about thier spouses.. and i wanna yell at them and say, " YOU signed up for this adn if your not happy, do something about it!!" Enough with the excuses, be happy, be thankful and marriage is not a free ride, it takes work - people feel like thier 'entitled' and don't see the need to work on their marraiges or themselves... thank you. I to choose ( i should say we, dave and i) not to have a mundane, meidocre marriage.. its for life, might as well make the most of it!! :0)
Vanessa